Glyptostrobus pensilis (Staunt.) Koch is a relict species in the Cupressaceae that previously had a global distribution but is now restricted to Southern China and two disjunct populations along the Annamite ranges in Laos and Vietnam. Using nuclear and chloroplast microsatellite markers (cpSSR and nSSR, respectively), we investigated the genetic diversity and divergence within and between 14 populations representing the entire range. Nuclear EST-SSR markers revealed low genetic diversity (He = 0.272) within populations and strong genetic differentiation (FST = 0.452) among populations. Populations in Laos, which represent the last primary forests of G. pensilis, contain the highest genetic diversity and are of particular conservation importance. The geographic cpSSR variation is consistent with the results from the nSSR analysis. Prolonged geographical isolation is likely to be the main reason for regional genetic patterns. Climatic changes during the Holocene, coupled with anthropogenic impacts, have further reduced its distribution and population size. The clear genetic structure suggests that at least, two refugia existed at different latitudes in Southeast Asia. Preserving and expanding its remaining habitat and increasing population sizes are likely to be the most important measures for the conservation of this species 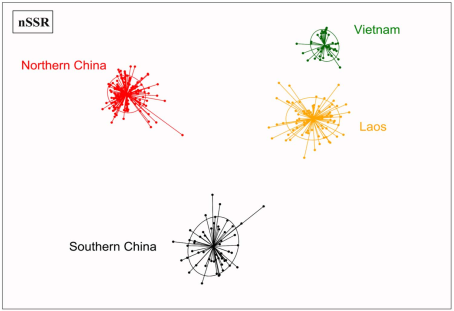